Former Holy Cross Goalie Tony Quesada Sign AHL contract with Houston Areos.Quesada Signs
Another Goalie in the Mix
GDI
In case anyone has forgotten him: Go back March 24th, 2006 the goalie of record, the star of the 2006 West Regional game, the darling of the Grand Forks media, The goalie of record between the Minnesota Golden Gophers and the Holy Cross Crusaders Tony Quesada has signed a professional contract with the Houston Aero’s of the American Hockey League. 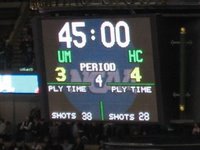 HOUSTON, Texas. - Former Holy Cross goaltender Tony Quesada has signed a contract with the American Hockey leagues Houston Aeros, the team announced Monday. The Aeros are the affiliate of the NHL's Minnesota Wild.