Crosses fingers. I think we don't have to worry about backup goalie Niklas Backstrom being in the mix next season., unless there's a lot of injuries. Or at least I hope we don't. The Wild have re-signed Devan Dubnyk. Wild fans can now exhale.


After three days of heavy-duty negotiation, the Wild has agreed to terms with the goaltender on a six-year, $26 million deal, sources say. That's a $4.33 million cap hit, making Dubnyk the 21st-highest paid goaltender in the game. He makes $5 million each of the first four years, $3.5 million and $2.5 million the last two. There is a limited no-trade clause for part of the deal.

"Like I said from the outset, he’s been very clear that he wanted to remain in Minnesota and we’ve been adamant about trying to keep him," GM Chuck Fletcher said. "We’ve been chasing stability in the goaltending position and we’re hopeful that Devan can be a steadying influence back there."

The deal almost certainly makes young goalie Darcy Kuemper expendable at some point. But at a $1.25 million salary and the Wild in the need of a backup this year, the time to trade Kuemper could come later in the season or next summer.

Dubnyk's deal will have a limited no-trade for part of contract.
— Michael Russo (@Russostrib) June 27, 2015


Looks like the Wild are trying to add another top-six forward for their lineup. This is interesting news right here. I wonder what it would take to get Iggy in a Wild uniform? I would also applaud the move if it happened.


Michael Russo, Startribune – The draft is over, no player trades were made, so whether it’s Sunday or Monday, bet that Wild General Manager Chuck Fletcher and coach Mike Yeo will try to get together in Minnesota with pending free agents Matt Niskanen and Thomas Vanek.

While those have been the most well-publicized names surrounding Wild interest in advance of the market opening across the NHL Tuesday, the Wild has other lines in the water, too.

The Wild has been in contact with camp, according to multiple sources. It’s unclear if the interest is mutual, but it’s definitely clear that the Wild is interested in potentially signing the future Hall of Fame winger and, ironically, all-time leader in basically every offensive category against the Wild.

I don't think people realize how many games and times that Matt Cooke has been suspended by the NHL. Here's a break down of Cooke's illustrious history and the number of games that he ended up sitting as a result of his bush league play. Like I said in another post, "I also have to wonder if the NHL's Department of Player head Brendan Shanahan already has Chuck Fletcher's cell phone number in is speed dial?"  I think it's just a matter of time before Cooke is suspended again by the NHL.

Bellow, is a typical Matt Cooke play that happened during the Stanley Cup Playoffs.

It's been a tough season for the former DU Pioneer forward Jason Zucker and his season with the Minnesota Wild is probably over after having knee surgery.

Winger Jason Zucker is likely out for the season, General Manager Chuck Fletcher said. He will likely need additional knee surgery after aggravating his injury while training.

“It’s gone from something minor to not,” Fletcher said.


Jason Zucker is likely out for the remainder of the season with a knee injury. He said he'll comment on the injury at a later time.
— Chad Graff (@ChadGraff) March 18, 2014

A look at "Jason Zucker's Lost Season", and what the future may hold for Zucker with the #mnwild. http://t.co/2ATGHW1fWX
— Hockey Wilderness (@hockeywildernes) March 19, 2014

Since initial shock I have decided to give matt cooke a chance...plz surprise us wild fans, we cud use some positivity right now
— Tyler Martin (@wildgeorge12) July 7, 2013

Sick of this Wild franchise. Fans have nothing to be excited about. Matt Cooke?? I have absolutely zero interest in this bum.
— mleegwater (@mleegwater) July 7, 2013

@braja57 @Russostrib From Pens' HR and a Matt Cooke superfan. Good guy off the ice? Sure. The point is, he played the wrong way for years.
— Jordan Hansen (@JordanBHansen) July 7, 2013

There is way too much emotion flying around over Matt Cooke. Try using common sense folks.
— Giles Ferrell (@gilesferrell) July 7, 2013

If you are comparing Heatley, Cooke and Clutterbuck or any two thereof, just stop. Don't care what your personal feelings of each are. Stop.
— Jeremy (@knowsknothing) July 7, 2013

This sums it up well. 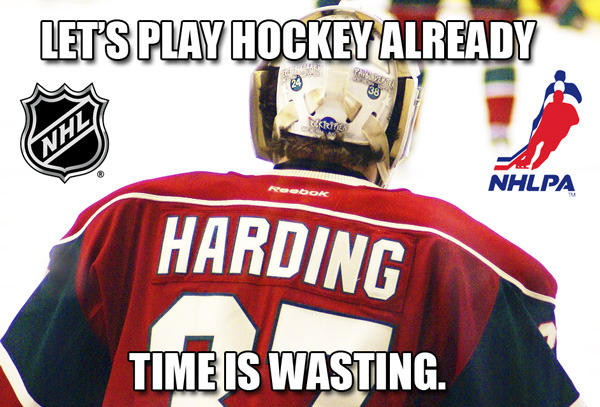 It was announced today that Wild goalie Josh Harding has MS.

So you say that there's a chance...

According to Michael Russo, Beat writer of the Minnesota Wild for the Star Tribune, the Wild are still in the mix for teams he New Jersey Devils and former Fighting Sioux All-American forward Zach Parise could sign with.


Zach Parise's agent Wade Arnott says that his client has narrowed his list of teams to a "select few," and according to sources, Wild GM Chuck Fletcher has been informed the Wild is on that list.

"Some" GM's want to reinstate the center-ice red line in an attempt to curb concussions.

This is a horrible idea, it would slow down the game and make the game of hockey less exciting to watch because it would cause more whistles and stoppages.

BOCA RATON, Fla. (AP)----The GMs began three days of meetings Monday. Several have said they would like to see the red line and two-line passes return in an effort to slow the game in the neutral zone, which might reduce the rate of concussions by making collisions less violent.

There is opposition, however, with many arguing that the removal of the red line in 2005 made the game more entertaining.

''We're looking at ways to make the game safer without taking away the physical nature of the sport,'' Minnesota Wild general manager Chuck Fletcher said. ''It's a balance you're always trying to strike.'